Day 139 592 days to go. Distance: transit total 8059km. It’s 10.00pm Tuesday 17/4/2012 Chinese/Mongolian border. Our trains disappeared. Has anyone seen our train? It’s taken off with Rubes . It’s weird, I had just read about ‘not to panic’ when the train disappears at the border. Apparently they need to change something important. We’re all in a transit lounge waiting so great chance to post. I’m a bit tired so if I’m a bit dribbly sorry J It feels like so long ago since stepping away from our cycling day to day. So much has happened between arriving and leaving Beijing. This morning started crazy at the station. They weren’t going to let me take Rube onto the train initially. Then I found this lad who could speak English and it started to improve from there. He helped us find out about excess luggage costs and processes re boarding. Also that Mum and Dad could get a platform ticket which the lad shout6ed plus one for himself. So we all went through the boarding gate when they called the K23. I was quickly pulled up by the station master who said I couldn’t take a bicycle on the train and that Mum and Dad would have to post it to me. Once we explained that the folks had to catch a plane he let me through and said to know better next time yayayaya!!!! It was so nuts. I had to take her front tire and panniers off and carry her onto the train like normal luggage. I was told I had to pay $150 excess and that the conductor would find me to sort it out once boarded so we’ll see. I haven’t seen him as yet so who knows. Right up to leaving China literally I have been helped by these beautiful people. The lad was in transit himself and hadn’t slept all night but just wanted ‘to practice English’ so was happy. It’s only because of his help that we go onto the train today. Ive been so humbled by the folk we have crossed paths with and the experience and the experience continues to be a good good thing for me about stuff that counts. Mum and Dad saw it fist hand this morning how a crappy situation can unravel then knot then unfold then trip then fall on its face then be spat out right way up in tact in the right direction albeit a bit wobbly J The next moment I’m saying goodbye and group hugging the folks and the little fella who was adopted by now. We had out tears and a few more on the train. I’m sharing the compartment with an Aussie lad. Jason works with the Holden Super 8s Team as an Engineer responsible for squeezing every bit of speed out of their cars. He’s an interesting guy and his job is fascinating. He’s heading to Belgium to do a handful of OS traces for the experience how cool. By the way there is no luggage compartment on the train so my girl and our stuff have to find a space in the compartment. Thank goodness there are just 2 of us in a 4 seater. More so thank goodness Jason is totally cool with sharing leg space with my girl who’s parked in between our seats on top of the trailer. The bag’s under my seat, panniers under his, tires in the over hanger. It’s a tight cozy squeeze but we’re in. Between chats and reading up on Mongolia, the time is passing so fast. The scenery was dramatic at first very raw and mountainous as we travelled through the area where we visited the great wall. After this it’s flatted out to dry steppe and grassy expanse. Sometimes it’s undulating but mostly it’s flat with wide blue skies as you would picture coming into this area. We’re spotting farms spotted and grazing herds of cattle and sheep and horses. We even spotted out first yurts which are felt round tents which I hope to see plenty more of up close and personal over the next weeks J There are allot of Kms between towns across Mongolia but I have read that yurts can feature regularly nearby the roadways. It finally registered over sunset that we’ll be soon cycling Mongolia and into the next stage of our tripping. The tests will be the weather and pooches. But first let’s get to Ulaanbaatar and take it from there. I plan to hang out there and do some logistics and preparations for about 2 weeks so let it warm up a bit. Talk soon. 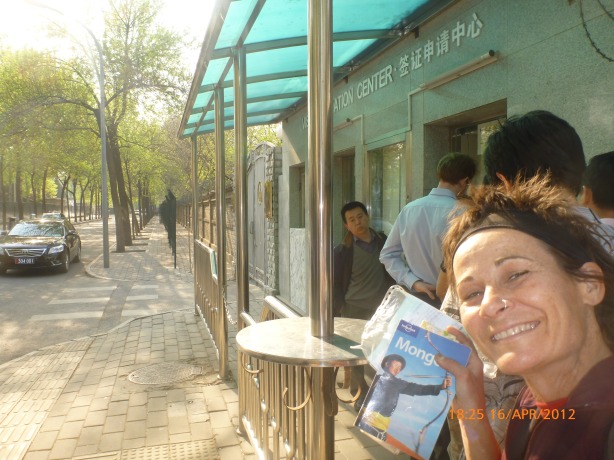